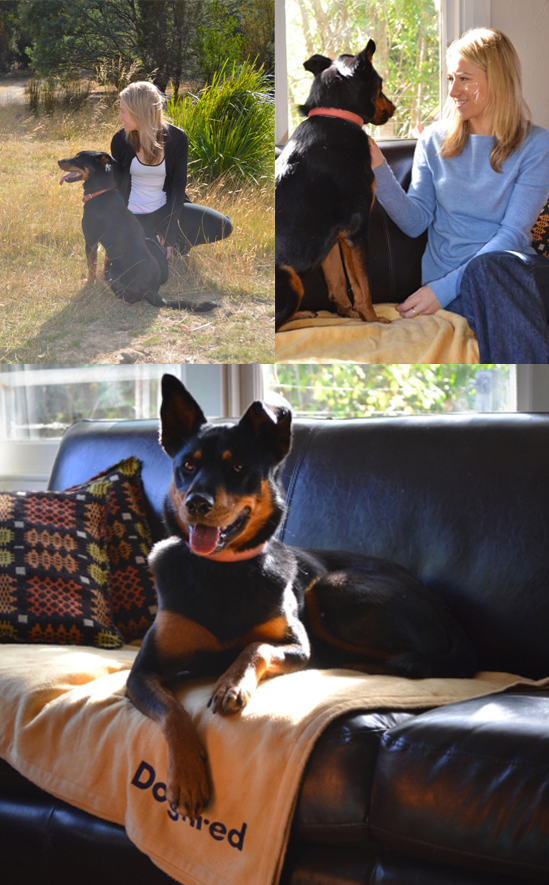 Kate Harrison lives in Tasmania's sunny capital Hobart where she works as a freelance PA and Business Development Manager at Island magazine, the state's leading magazine of ideas, writing and culture. When she's not at work at her West Hobart home office, Kate spends time with her faithful dog Frankie and goes for regular walks and runs at a nearby nature reserve. Here we find out more about Kate, her four legged friend and how they met and formed a very special bond.

How did you come to meet your dog?
My ex husband and I were looking to adopt a pup from the Hobart Dogs’ Home and without trying to have too high an expectation on what we wanted, we both had our preferences. I grew up with Rottweilers so I was very keen to adopt a Rottie pup, however my ex was a little hesitant. He wanted a dog that was known to be calmer and without the reputation of a Rottie; he wanted a Kelpie. We walked in and the fifth dog in a long line of cages was staring back at us (and I swear she was smiling at me). As soon as we saw she was a Kelpie x Rottie, we knew that she was coming home with us that day. It was definitely love at first sight.

What is Frankie's best quality?
Frankie just seems to know what I need when I need it and sometimes before I even know that I need it. She helped me through my divorce in so many ways; hugs, licks and her insistence on daily long runs through the bush. I’m not sure I would be as strong as I now am without her help.

Does Frankie have a special talent or trick?
She’s pretty good at making people like her. She definitely knows that she’s a cute pup!

What is the thing Frankie does that makes your heart melt?
When I’m in need of a hug, she squeezes her nose under my arm and forces a cuddle on me.

What is Frankie's most annoying habit? How does she get your attention?
Jumping on other people when they don’t want her to, especially people that aren’t really ‘dog people’.

Does Frankie have a social media profile?
No, although she has won me three competitions on twitter and has starred in a Tasmanian feature film.

Where's your favourite place to go together?
Knocklofty Reserve in West Hobart, we run there every day and Frankie loves it. It also keeps me pretty fit and helps me get my daily dose of fresh air and Vitamin D.

Do you take Frankie on holidays or weekends away?
Yes, any chance I get. Our most recent trip was to a dog-friendly accommodation on Bruny Island and she had a great time with all the other dogs there.

What's your favourite dog park/beach/hangout?
Other than Knocklofty Reserve, we like to visit Kingston dog beach near Hobart, where Frankie loves running around, meeting other dogs and dipping her toes in the water.

How do you accommodate Frankie while working at home?
I let her sleep under the table while we have production meetings … much to my editor’s dismay (he’s not much of a dog person).